The devastation of the recent earthquake in Amatrice reminds me of the precariousness of life. The town had been preparing for its annual festival celebrating the world-renowned sauce that bears its name – the “amatriciana” would instead be celebrated all over the world. The region of Calabria is likewise no stranger to hardship, and in times of uncertainty past peoples have turned to faith. Even today, the Santa Maria Madre della Consolazione with the annual Festival of the Madonna della Consolazione, as she is commonly called, is celebrated every year in Reggio Calabria, the region’s largest city.

As coined by Ciccio Errigo in the local language or Reggio dialect:

By earthquakes, in times of war and peace,
this festival has been and will be celebrated!

THE PAINTING OF THE MADONNA DELLA CONSOLAZIONE 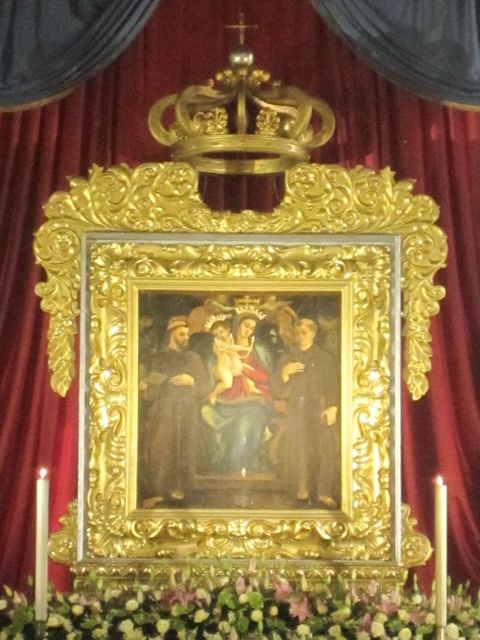 The Painting of the Madonna della Consolazione

At the center of the festival and procession is the sacred effigy, painted by the Reggio artist Nicolò Andrea Capriolo in 1547. The approximately 4 x 4–foot (120 x 120-centimeter) canvas depicts the Madonna seated on a throne holding the Baby Jesus, surrounded by Saint Francis bearing a cross and Bible, and Saint Anthony of Padua with a lily and theological book. Two angels crown the Madonna. 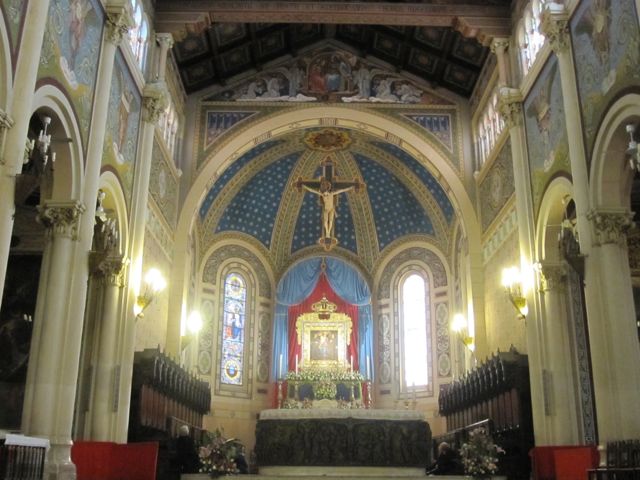 According to the legend, this large painting mysteriously disappeared from its place in the Cathedral of Reggio, only to be discovered by a young shepherd on the nearby hill of Eremo. The painting was brought back to the cathedral, only to be found again on the same hill. The faithful took this as a sign and built a church on the site where the icon had miraculously appeared. Thus, this sacred representation of the Madonna makes its home in the Basilica of Eremo.

Over the centuries, the Madonna is credited with having saved the citizens of Reggio from various plagues, famine, Turkish siege and earthquakes. Throughout their many natural disasters, the citizens have come to rely on the Madonna as their protector, and their faith is reflected in the substantial attendance of the annual Festival of the Madonna.

THE PROCESSION OF THE MADONNA 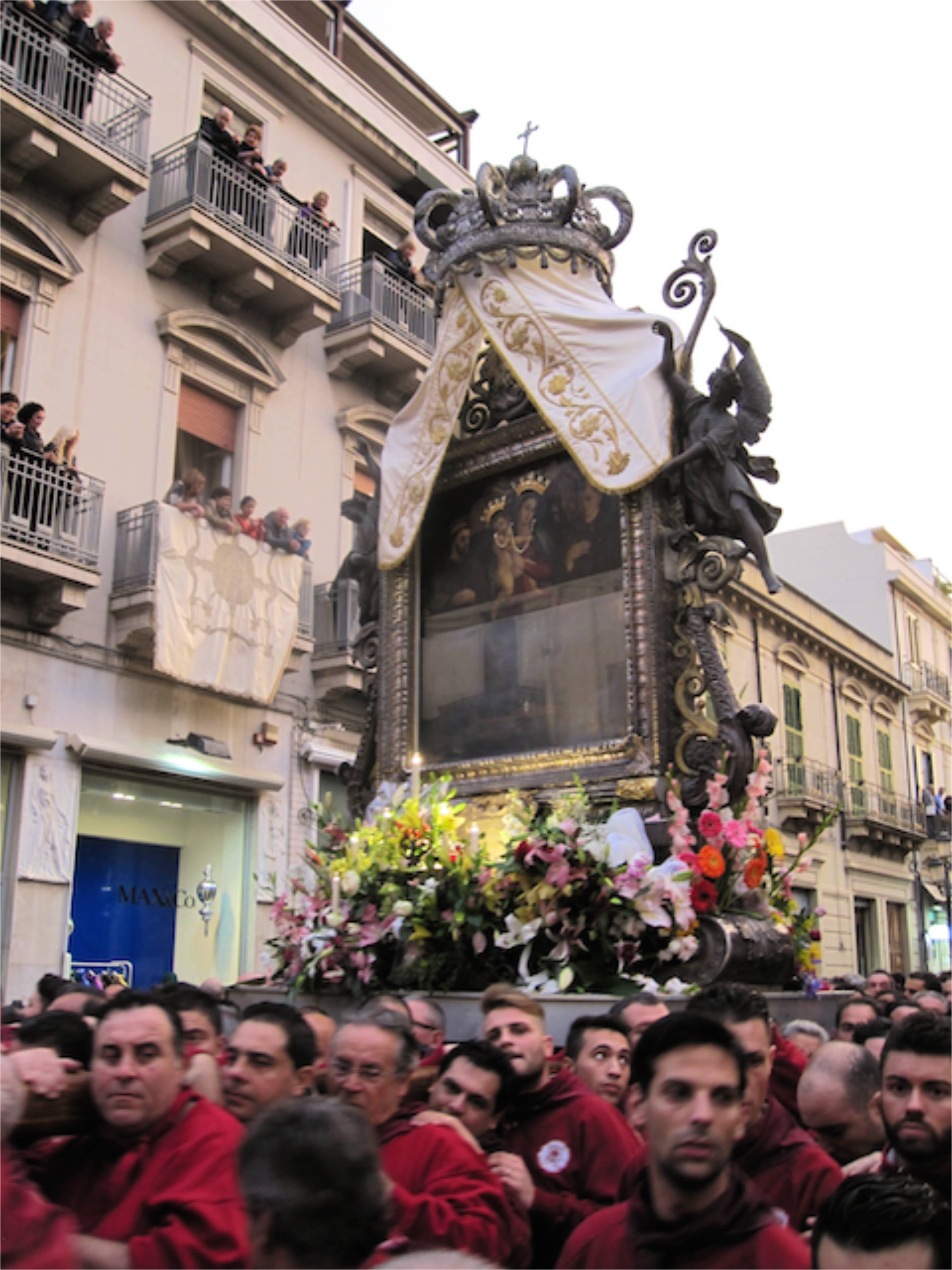 Reggio’s Procession of the Madonna

Every year from 1636, the Madonna della Consolazione has been carried two miles (3½ km.) from her home in the Basilica of Eremo to Reggio’s Cathedral, officially the Basilica Cattedrale Metropolitana di Maria Santissima Assunta in Cielo. Beginning with much preparation and a vigil at the Basilica of Eremo the evening before, the procession takes place on the second Saturday of September. On the following Tuesday, the painting is taken out again and carried around the city for another couple of hours. The painting remains in Reggio’s Cathedral for two months before a return procession brings it back up the hill on the Sunday after the twenty-first of November. The sacred Madonna painting then remains in the Sanctuary of Eremo until the next September.

The carrying of the Madonna della Consolazione is quite an involved procedure, as the painting is mounted in an elaborate silver-plated frame topped with a large crown. Made of heavy wood, the structure or vara is about fifteen-feet (4½-meters) tall and seven-feet (2-m.) wide. There are about 500 members of the Portatori della Vara or carriers of the iconic structure, and they take turns of 100 at a time to bear the weight of the heavy logs on their shoulders. They must balance the enormous vara, weighing three tons, down and up the hill to Eremo, and perhaps giving the biggest thrill, the volata, when they run up the steps to enter the Cathedral in Reggio.

Clergy, cavallieri or knights, local bands and thousands of townspeople and visitors take part in and follow the procession. From Eremo, along Corso Garibaldi or the main pedestrian street, to Reggio’s Cathedral, the cortège is accompanied by religious songs and prayers. (Here is a link to my short Video of the Procession of the Madonna.)

REGGIO’S FESTIVAL OF THE MADONNA

The Festival of the Madonna also features a host of secular activities and culinary traditions. Large quantities of rolls filled with sausages and peppers are consumed, and the frittole, a traditional pork dish, is enjoyed throughout the holiday (see Le Frittole: The Pig Boil, Calabrian Style). The tarantella is danced by formal troupes (see A Calabrian Tarantella) and by impromptu dancers spurred on by accordions and tambourines. The Giganti, giant puppets that rest on the shoulders of their carriers who dance through the streets, make an appearance (see Palmi Museum). And young and old delight in the colorfully decorated anise cookies called ‘nzuddha, as well as other sweets and nuts. 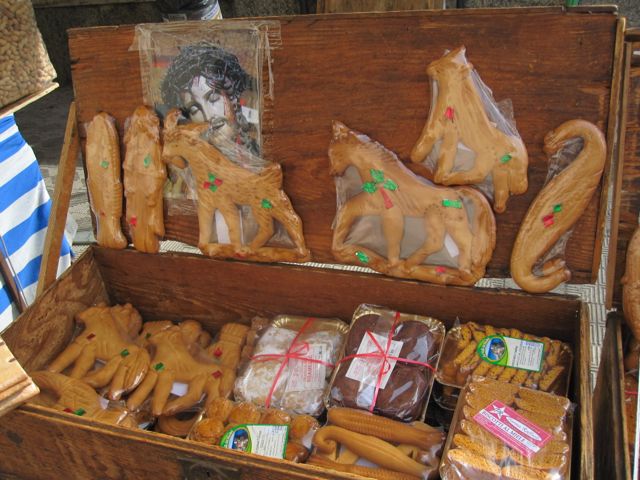 Incredibly, Reggio’s Festival of the Madonna della Consolazione has been observed for almost five hundred years. One of Calabria’s biggest celebrations, the festival has been and will be commemorated, as in Errigo’s words, in times of war and peace, by earthquakes… 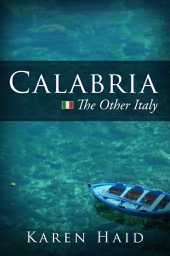 Read more about this festival and Calabria’s culture and traditions in Calabria: The Other Italy, available in paperback and e-book versions.

See also the Procession of the Madonna in Reggio Calabria on My 5th Blogiversary. 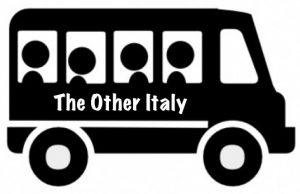 Traveler, blogger, tour leader and award-winning author of Calabria: The Other Italy and Basilicata: Authentic Italy – the essence of Southern Italy.

My interview about #Basilicata with the @FlavorofItaly #podcast whose host was "captivated" and "enthralled" with what I shared about this fascinating Southern #Italian region in my book Basilicata: Authentic Italy. Listen here: https://podcasts.apple.com/us/podcast/flavor-of-italy-podcast/id1503709802

What kind of hair day are you having? Colorful cer

Talking about Basilicata with Wendy of the @flavor

Another castle in Basilicata - this is Venosa and

A little shade on Scilla beach… gelato, anyone?

Talking about Basilicata this evening with Wendy o

At a summer farmer’s market in Gambarie, Calabri

A sporty little Fiat Balilla from the classic car

Did I hear it was national cheesecake day? Here’

Personal items of a brigantessa - on my latest blo

What’s a brigand? Check out my new blogpost! #b

These table grapes from my friend’s garden in Re

Sunset over the Strait of Messina - #calabria #c

On a Calabrian beach… at the end of the day. #c